Bruce Sugar  is my favourite recording Engineer from L.A., U.S.A. He was nominated in 2009 for a Grammy with Ringo Starr. I love his work with Ringo, and also his albums with Paul Mc Cartney, Joe Walsh, and Guns n Roses, amongst others.

Bruce came highly recommended, and when he heard my music he came on board as part of the team, to help me produce my album Spanish Breeze, recorded at Westlake Studios in L.A., back in 2010.

I decided to record the album live and Bruce’s extensive experience of getting the live feel, made it happen with ease. We decided to record at 96khz and 24 bit resolution as my music has great dynamics and the extended frequency range and resolution, allowed the softest part of all the performances, to come across with crispness and extreme depth of sound. 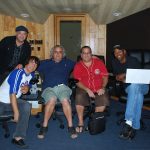 Bruce Sugar´s biggest contribution came with the mix of the album. After the recording, I returned to Barcelona, Spain and mixed the album at Estudios Aura. Unfortunately, I was not happy with the results and my production.

So I decided to get Bruce back on board to take care of the mix. To my surprise, once I heard Bruce’s improved mixes, I became aware that the problem with my mix was the kick drum. It was too low in my previous mixes, Bruce gave it a stronger presence and made the band dance around it in the mix with extreme dynamics and minimum compression.

Later that year he came over to Barcelona taking a break from working with Ringo Starr in the UK, and we celebrated the success of the album with good Catalan food and wine.