“What a wonderful performance! Pure joy!””Thomas, thank you so much. You were wonderful! 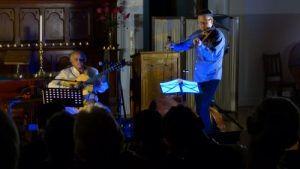 I believe music has the power to help us feel the beauty of existence , with little distraction from conscious or unconscious thoughts. The audience that attended this last show of my 2015 Melbourne concerts was superb, allowing me to channel all my thoughts and emotions into portraying the essence of my humble understanding of the beauty of life , through my music and guitar.

I thank you all for being part of the show and making this evening concert, one of the most magical of the Melbourne 2015,  guitar concert series. The intimacy of the church, lit up by a hundred candles, soft blue and green lights reflection from the magnificent stain glass windows, created the ideal setting for one to close his thoughts and let the beauty of music seep in.

I thoroughly enjoy performing at the Armadale Church. Its size, acoustic reflections, and visual colours, create the ultimate setting for music to explode with joy. The audience engaged in my presentation of personal compositions and contemporary interpretation of Spanish flamenco and popular music.

What does the audience hear?

This is not your typical flamenco guitar concert with overpowering constant high tension. Through the guitar, I portray the full array of musical expression I master. I try to create an experience where I caress all the emotions I encounter, leaving constant room to savour further musical expression. I feel music as a constant flow of tension and release. It feels like a series of waves, that create a rhythmic trance, where our thoughts subside and give way to a peaceful truce of existence. The nylon string guitar, also called the Spanish or classical guitar, is my choice of instrument for this experience to occur.

Tamara Murphy, accompanied  Jazz interpretation of Boleros as: Besame Mucho and Dos Gardenias  para ti. Spain is extremely rich in cultural diversity. My mother is from the northern part of Spain,  Asturies,  where there is great Celtic tradition. Steven Gilbert, on violin, played with me the Alborada of Aladino. The Alborada is a traditional Asturien musical composition dedicated to sunrise, and typically associated with the waking up of all the folks, after a good nights party, to a new dawn and the new festivity of the day.

Once again we had a full house at our October edition of our Melbourne Concerts in 2015 , a vibrant atmosphere, young and old music lovers, an audience willing to dance, clap, and enjoy the beauty of music. Thank you all for allowing me to share with you my music. On stage I must also thank Xanet Calbet, on guitar and palmas, and Paul Martin on palmas, for their wonderful performance.

My Spanish guitar is a vehicle of self expression. Flamenco and jazz are genres that allow great creativity. I am always marvelled as how music comes to life when played live, that is when the audience listens and shares with you their enjoyment. It creates a magical bond where every note is savoured by both the performer and the audience. This has been the fourth concert of this years 2015 Melbourne Concerts. With every concert the crowd grows with individuals eager of simply beautiful music. As a consequence, I have decided to extend the series into the year 2016 with 8 more Melbourne concerts to be celebrated in Armadale. 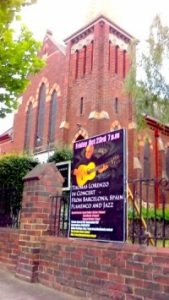 News about our next concert

In our following edition of our 2015 Melbourne concerts, on November 27th at 8 pm, the audience will be greeted by a new stage show, creating visual ambience through lighting and images. The church has a unique setting with a stage depth of over 20 meters. The audience will be surprised by the new atmosphere that will guide them to further immerse themselves into the beauty of music. In order to allow for this visual ambience to take greater effect, the start of the show has been rescheduled until 8 pm.

Live music is here to stay

I am very happy to see how music lovers wish to engage in live music, in a concert setting, a listening setting. Internet show cases constant virtuosity of intense interpretation, but only in a live music show, can we have the luxury of spanning over a period of one hour, a conglomerate of emotions. Live music and guitar playing has to be able to maintain the interest of the listener during the whole span of a show. This requires skills not seen in any TV show.

Live music is here to stay and this unique experience is proving to be successful towards a goal, where I prove that audiences are in need of music that expresses emotions. Flamenco and jazz are just simple delivery genres of such musical pleasures. I must also thank the representation of the Kingdom of Spain as we had in our audience the Consul of Spain in Melbourne and the Chancellor.   I am looking forward to seeing you all out next concert here in Armadale on November 27th at 8 pm. 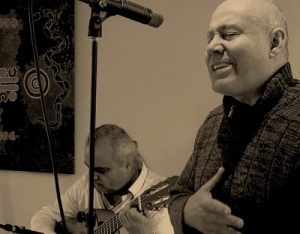 This editions of Melbourne Concerts 2015 was dedicated to Federico Gracia Lorca .Carlos Sanchez, our actor from SBS radio, brought Federico Gracia Lorca and the Romancero Gitano to life. Lorca was friends with Dali and Luis Buñuel and his poems ,also portray a surreal vision of existence and emotions.

Spain has very diversified cultural identities that have evolved over the past centuries. Spain has 4 official languages and as many dialects at valleys found  on the peninsula.  As a  consequence, music is also of great diversity.

It brings me great pleasure to showcase in each concert singularities of the Spanish culture Federico Garcia Lorca Spanish poet,  play writer born in 1898. Member of the  Generation of  27.  Lorca contributed to the second golden age of the Spanish theater and poetry. Some of his works include: Romancero gitano,  Llanto por Ignacio Sánchez Mejías, Bodas de sangre,  Yerma ,  La casa de Bernarda Alba. Lorca was executed by Nationalist forces at the beginning of the Spanish Civil War.

His works were censored  by faciscm until 1953.  50 years afters his assassination the Spanish central government  erected a monument at the site of his murder. In this concert we honor his universal contribution  where his works will come to life through music.

I wish to thank the wonderful audience that come to this concert. We all feel very satisfied at the turnover at all our past concerts here in Melbourne. I also wish to thank Conchita Carrasco for her creative Castañuelas and percussion on all flamenco pieces, and Xanet Calbet for her delicate Spanish guitar playing on Bailas , Dos Gardenias para ti, and her passionate flamenco percussion.

Melbourne is a vibrant cultural city where we constantly have the opportunity to clench our thirst for culture in all its variants. Our Melbourne concerts will continue during the whole year 2016 Community groups are invited to sit down and enjoy the evening with all of us. Please get int touch for complimentary passes issued to all our Flamenco Guitar Concerts.

I am very pleased to acknowledge the support received from all music lovers towards our monthly concerts here in Melbourne. The crowd was of all ages ranging from 4 years of age to seniors. Everyone that attended the concerts was engaged and therefore the concert was a huge success. 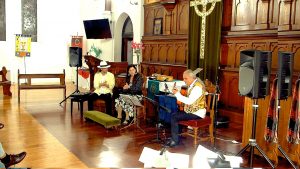 Live music is based on an interaction with the audience. The music flows from the performers to the audience where it is felt and understood. I believe that when we engage in a conversation and we feel we are been acknowledged, approved or listened to. This results in great joy and as a consequence more and more is fed to the listener.

As the concert moves along the feeling of joy and well being drastically increases. Music is a constant need in our lives. Live music in a venue where everyone is joining in a listening experience is a must to consider on a daily basis. Live music is big in Australia but unfortunately a lot of it happens in noisy places as restaurants and pubs. Musicians need to be heard and understood to be able to create to their full potential.

This last Sunday we offered a selection of Spanish traditional music as:  paso dobles, sevillanas, flamenco as bulerias , alegrias , solea and a selection of my own compositions developed in a improvised manner alongside bass player Ben Robertson. Xanet Calbet and Conchita Carrasco added the flamenco and Spanish touch to all compositions. 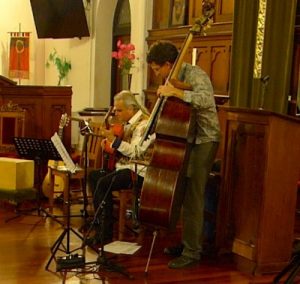 We are looking forward to our upcoming concerts that will be help on a Friday night.  At each concert I will be offering cultural diversity alongside special guests. On Friday September 23 Carlos Sanchez from SBS radio will join us.

I will dedicate this to the Spanish Poet Federico Garcia Lorca. I am looking forward to seeing you all again and sharing with you contemporary Australian culture based upon my life in Spain

The guitar concert as as a great success. The audience had the unique opportunity to listen

I have produced these series of Melbourne guitar concerts to showcase the diversity of music in Spain. Flamenco is only one art form of many. The unique soothing acoustics of the church allow the audience to reflect  upon the beauty  of evolved tradition. Music is extremely important Spanish tradition and shared amongst over 500 million Spanish speaking people on the planet.

Music brings out the good in us

Through these concerts I further understand how and why  music has evolved through history. I believe music brings out the good in all people. And it is a positive reflection of the will of cultures to share and live in peace. 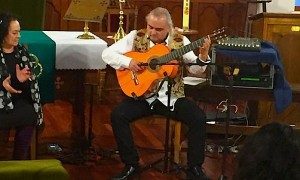