“La Farruca” is a style of flamenco music. It may be performed with lyrics ( vocals) and as most flamenco styles in can also be danced to. It is played in 4/4, interpreted at a relative slow tempo and accompanied by melody and harmony defining an aeolian key. 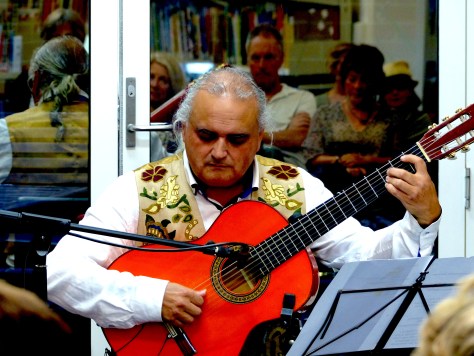 In the following examples you will see how slow tempos are appropriate for “accelerandos” as a possible method of achieving intensity in the dance and impact on the audience.

It is very common in flamenco to relate styles to certain keys. All styles in theory can be played in all keys . But, those keys that allow open strings on the guitar broaden the possibility of expression, rhythm and accompaniment of the spanish guitarist.

To be called “Farrucco” in Spain means to be considered brave and daring. Also, the choreography used to interpret a Farruca can also be described as brave and daring , explosive and dramatic in the ff and tender and soothing in the pp.

The flamenco dancer will choreograph fast turns, quick intense footwork, held lifts and falls, dramatic poses and bursts of filigrana (often with a flat hand). The Spanish or flamenco guitarist has the role to add dramatic value to all movements of the dancer.

Contemporary flamenco will aid this concept through harmony and melody, traditional flamenco would aid this trait with mainly rhythmic density and dynamics.

Please view and listen the following videos to and see if you can pick up the characteristics that I have mentioned above.

It may be performed with lyrics ( vocals) and as most flamenco styles in can also be danced to. It is played in 4/4. Most of all interpreted at a relative slow tempo and accompanied by melody and harmony defining a minor key.

You will also notice that “La Farruca “and most forms of flamenco are more vertical in expression than horizontal. As a consequence they sort of explode then rest. Where as to pop music,that is more horizontal in the exposition of melody, harmony and rhythm. We tend to groove and dance without interruptions. The climaxes in the music are achieved more gradually over time.