I am very pleased to share with you my new flamenco guitar release, a personal vision of feelings, that when summed up make who I am. No one teaches us to understand, feelings, why we choose or not to embrace them, or who we are.

With music, I choose to express the feelings that are part of with being alive, embracing them with love. The feeling I have composed about today, is called Nostalgia. 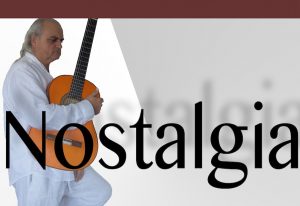 I like to look at the past and remember the nice experiences, and the not so nice. I have learnt to view the past, as if I was in a movie, but without actually reliving the past. When I relive the past, thinking about it,  it sometimes blocks too much the present, and knocks me off balance.

Music does not allow me to relive to much the past, but it does allow me to get a nice glimpse of it, so as to reaffirm the present.

I composed this song, this new flamenco guitar release, on a Mid Summer afternoon in Melbourne,  in the year 2018. I was feeling nostalgic and I felt the need to say it with  music.

How did I record it

This tune is a very simple guitar song. I composed it in just a few minutes.  In accordance with my need of perfection I recorded it over 20 times, with different tempos and arrangements, reflecting enormous variations of complexities.  I tried it all.  At the end, I came back to the original idea, the most simple idea, a song with three sections, repeated twice.

The first time I perform the song, I interpret it in a laid back manner, with non predominant articulation. However, on the repeat I perform with strong articulation and emphasis.

The first time I played it to feel light nostalgia, and the second time to feel heavy nostalgia .  I suppose, that the idea of the song is to feel both opposites, and after completion, just stay in the middle balanced feeling of satisfaction.

I adore music, the language and all the emotion I am able to express with it, and the guitar. The guitar is a marvellous instrument that allows me, and others, to be very lyrical and passionate at the same time. Guitarists can enjoy the widest range of expression, any musical instrument can give you.

How did I produce it

I selected the Microphone Neumann TLM 103, and the preamp AMS Neve 1073N,  to capture the analogue  sound.  I used the Apogee Ensemble Interface, to convert to digital audio, recorded at 24 bit resolution, and at the sampling frequency of 96 kHz.

The mix is straightforward, as I only boosted 2dbs in the 2k range with a two octave span. I added a long hall sound to the existing room sound, already embedded in the recording. I adjusted the overall loudness in the final mastering of this New Flamenco Guitar Release Nostalgia.

I mentioned in the previous paragraphs, that I recorded this New Flamenco Guitar Release, numerous times. But, before I record a guitar track, I tend to play it for weeks,  a few times a day, until I get the right feel for it: so that way, I can record it in one go.

The style is definitely that of a Latin colour, with a Flamenco Rumba sound.  In Spain, Flamenco has now evolved drastically, as Jazz has in other parts of the world. It has become an advanced popular form of expression, which encompasses a variety of styles.

This track is called Nostalgia, and it forms part of the collection of 12 single Flamenco Guitar releases that you can hear on my music page, that reflect upon my last two years of performing in Australia, and Spain.

These are the tracks I will be performing at my Melbourne Concerts, that I will produce during this coming year 2018, with special guests:  Ben Robertson on Bass and Angel Mellado on Vocals. Please sign up for my newsletter, to get updates on all my concerts and releases, here in Melbourne, Australia and abroad.

I feel very excited,  to take all my music live, and share my humble emotions. It brings me great pleasure to feel how my music, does get across to the audience,  and also how the emotions soar across the air, and form part of the live interaction.

What style of music do you play

My music is guitar orientated.  I do perform and have recorded with Electric, Acoustic and Spanish guitars . My favourite choice is that of Spanish guitar, because of the great dynamics and timbres, it can produce.  Since I have lived in Spain for 38 years, my musical language is greatly influenced by Spanish folklore, and flamenco styles of music.

What other tracks would you like the listener to enjoy

Over the last 10 years I have released 4 Cds and 12 singles.  I would like to invite you, to listen to some of the tracks, and the emotions created.

El Deseo is an acoustic guitar album, that describe the process of completing a desire, from start to end.  The 10 tracks take you through the process on how to make a desire come to life, with pleasure and limits. The limits are the boundaries we must put in, to assure we can achieve a goal only with joy and satisfaction. The objective of all desires, should be only that of satisfaction. But satisfaction only occurs when we are able to share with others . To share is nor to state, look how pretty I am, but it is a means of making the other person feel pretty about themselves. That is the beauty of satisfying desire: sharing.

Who are your clients

My music is very popular for wedding ceremonies. It produces the best possible vibe of Joy, as all Wedding Music should strive for. Guitar music can awaken, in all, the love we have deep inside of us for life.

If you are getting married, send me an email, and I will invite you to my next Melbourne Concert.

All guitar students and my Creative Guitar School, in Melbourne, learn to play the guitar in a manner, where personal satisfaction and creativity is the ultimate goal.

How to improvise on the guitar , how to play flamenco guitar, how to play blues guitar, jazz guitar  is all a consequence of the need of self expression.  The students, at all guitar courses and levels, will be exposed to a variety of styles in contemporary idioms with electric, acoustic or Spanish guitars.