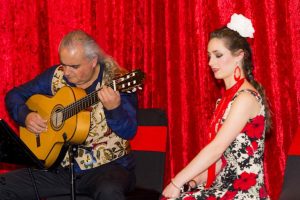 Thomas Lorenzo is a unique versatile performer and composer in variety of contemporary styles of music as jazz, pop and rock. Please visit the home page for his next performances and to listen to his compositions. Flamenco guitar is his passion that derives from his mother country, which is Spain.

Caterina Pizzati, a Melbourne local talent, a formidable flamenco dancer, bailaora, astonished the RACV club with a spectacular array of classical and contemporary flamenco movements. Flamenco invokes passion and beauty. It is rare to see such a brilliant performance of solo guitar and Bailaora

This combination with Thomas Lorenzo and Caterina Pizzati is both intimate and powerful. 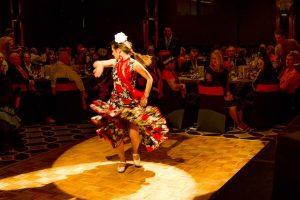 Some quick facts on some of the numerous flamenco styles.

La Buleria is one of the most most popular and dramatic arts forms of the flamenco world which permits great freedom and improvisation. Harmonically it revolves around the flamenco phrygian sound, as it´s tonal centre.

Alegria in Spanish means happiness. It is performed in major keys. It does not generally use the phrygian tonal centre. As a simple comparison, the resulting harmonic structure and sound is closer to Celtic music than sounds that evoke Mediterranean culture. What makes it flamenco, is the rhythm and the chosen form of melodic expression.

Folk music and dance of Seville and its region in the south of Spain.